Yesterday evening, the attorneys at Whitt Law attended the Kane County Bar Association’s Annual Membership Dinner where Whitt Law Partner Stuart L. Whitt was recognized for his 40 years in the practice of law. Congratulations to Stuart on a remarkable 40 years! Your dedication to the profession, your clients, and your community have inspired many over those years. We wish you many more years of strong advocacy in the interests of your clients and community through your work at Whitt Law.

Below you can read more about some of Stuart’s accomplishments that were shared during yesterday’s recognition. 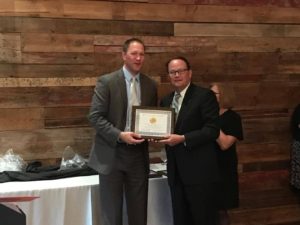 A lifelong resident of Aurora, Stuart Whitt graduated Aurora College in 1974 and Loyola University of Chicago School of Law in 1977. While at Loyola, Stuart served as an editor on the Loyola Law Review and received the American College of Trial Lawyers medal for excellence in advocacy in its National Moot Court Competition.

Upon graduation from law school, Stuart joined the Aurora firm of Matthews, Dean, Eichmeier, Goodin and Mrkvicka where he quickly became known for his success in advocating the interests of rapidly growing school districts. In 1987, he founded Whitt Law, a firm dedicated to representing school districts generally, as well as local governments of all types in large, high-stakes property tax disputes. Today, Whitt Law has eight attorneys and offices in Aurora and Springfield.

Stuart has a broad range of experience in school district matters, including the acquisition of elementary, middle and high school sites. Under his leadership, Whitt Law has provided legal services for construction projects at over 100 public schools throughout the region, and has represented school districts and other local governments in assessment, property taxation, and other matters before the Illinois Supreme Court, the Appellate Court for all five Judicial Districts, and the Circuit Court.

Stuart also regularly represents the interests of school districts and other local governments before the Illinois General Assembly on matters of public education and property taxation. From 1998-2000, he served on the state’s Electric Utility Property Assessment Tax Force, having been appointed by the Speaker of the House of Representatives. More recently, he served on the Property Tax Reform and Relief Task Force, having been appointed by the House Republican leader.

Stuart recently turned over management of the firm to his son and partner, Josh Whitt. Despite passing leadership to the next generation, Stuart continues to enjoy the practice of law and has no plans to slow down anytime soon.

High school sweethearts, Stuart and Becky Whitt have been married for 45 years. They have four children and seven grandchildren.